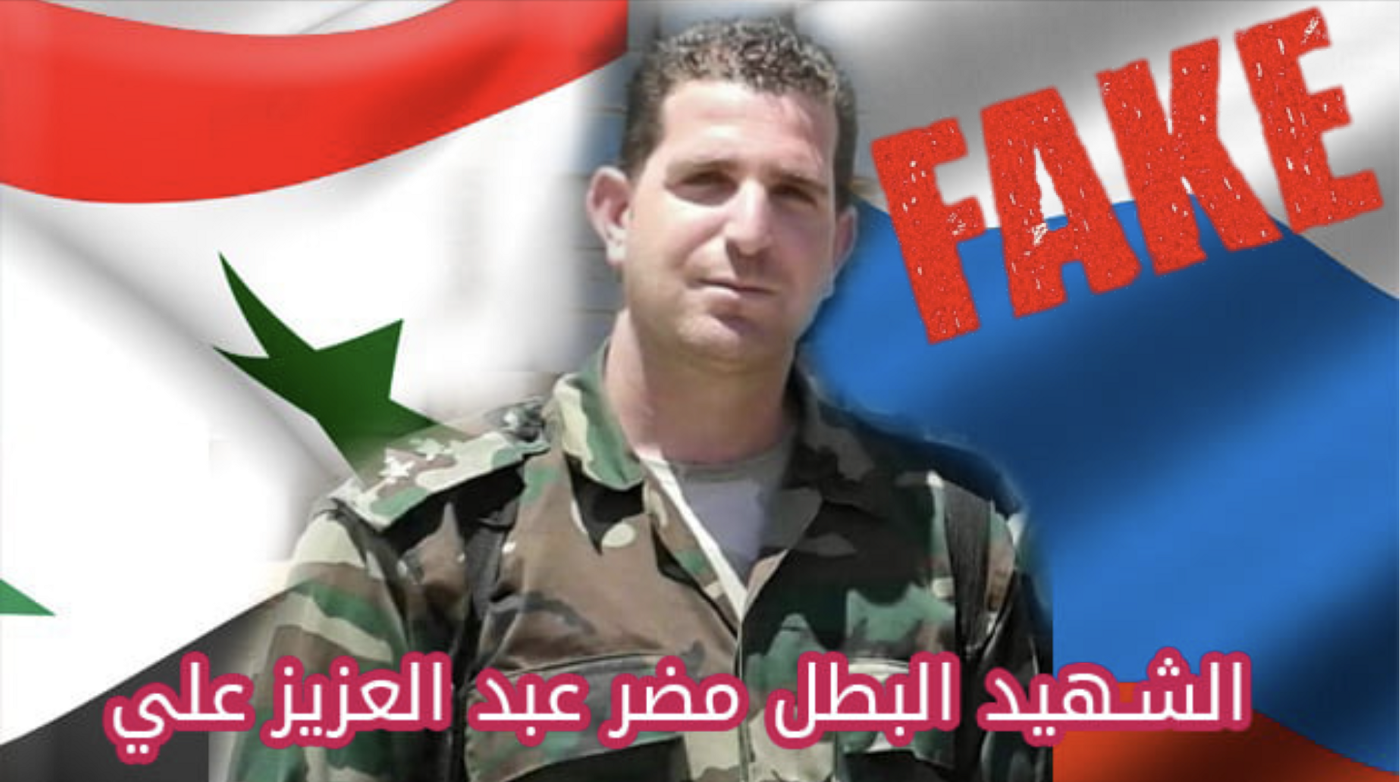 BANNER: Screencap of a now-deleted post from the Rafik Lutf page alleging that the first Syrian soldier had been killed in Ukraine. The claim was debunked, as the soldier in the photo had died in 2015. (Source: Rafik Lutf/archive)

As news emerges that Russia is seeking out Syrians to fight in Ukraine, Facebook groups are being flooded with unverified recruitment posts that exploit the dire economic conditions in Syria by offering high salaries to Syrians willing to join Russia’s ranks. Many of these recruitment posts appear to be fraudulent, as the groups are also flooded with confusion from users, who want to register for the war in Ukraine, but say they’ve only encountered scammers asking for money.

Russian President Vladimir Putin has endorsed a plan to bring 16,000 “volunteers” from the Middle East to fight in Ukraine. “If you see that there are people who want to come on a voluntary basis, especially not for money, and help people living in the Donbas — well, we need to meet them halfway and help them move to the war zone,” Putin said on March 11. US officials also confirmed to the Wall Street Journal, “Moscow is recruiting Syrians skilled in urban combat to fight in Ukraine.”

This week, Syria marked eleven years since the beginning of the revolution and subsequent civil war. Today, in both government and opposition-controlled areas, many Syrians are plagued by unemployment, a lack of opportunities, and poor living conditions. Moreover, while it appears that genuine recruitment efforts are underway in Syria, the process appears to be limited and tightly controlled. And in the wake of the news that Russia is seeking Syrians to fight in Ukraine, scammers appear to be exploiting the lack of work opportunities in Syria by advertising high salaries for those who join Russia.

A Facebook page presenting itself as a pro-Assad journalist named Rafik Lotf repurposed an old photo to falsely claim that a Syrian soldier had died in Ukraine. The now-deleted post said that Mudar Abdul Aziz Ali was the first Syrian soldier killed in the war. However, Syrian fact-checking organization Verify-Sy found that the photo is actually of Miqdad Hussein Khalil, a Syrian Arab Army soldier killed in 2015. Verify-Sy found at least twenty examples of local media and influencers sharing the false claim.

The page also posted about Russian efforts to recruit Syrian soldiers. The recruitment post claims the Russian government will pay soldiers €1500 per month and cover all “expenses, food, clothes, and tobacco.” The post, which has 8,200 reactions and 5,800 comments, also falsely claims that at the end of the war, Russia will offer €50,000 to each Syrian soldier who joins their ranks.

The Rafik Lotf Facebook page has more than 113,000 likes and 176,000 followers. Created in 2011, it began posting again on March 11, 2022 after being dormant for nearly one year, and is run by two administrators based from Turkey. However, the page’s authenticity is disputed, as a personal Facebook account for an individual named Rafiq Lutf claims the page is impersonating him. On March 11, the same day the disputed page started posting again, Rafiq Lutf went live on his personal Facebook account to warn others that the page is fake.

The DFRLab analyzed two Arabic-language Facebook groups that shared the Rafik Lotf page’s recruitment post, along with other similar recruitment claims. The first group, “Business opportunity with Russian friends,” has 1,800 members, while the second group, “Work contracts with Russians outside and inside the country,” has 1,100 members. In both groups, there are primarily three types of posts: recruitment posts offering financial incentives to Syrians who join Russia in the fight against Ukraine; users who want to register for the war but don’t know how to do it; and users reporting that their attempts to register had led them to scammers.

In the recruitment posts, most comments are from interested users seeking information on how to join the Russian ranks. When a recruitment post goes up without salary information, the overwhelming majority of comments are from users asking about the salary. One recruitment post said that army defectors will not be accepted, though recruits fleeing the police are still eligible. The most popular recruitment post in both groups was authored by the same user, who promised a six-month USD $1800 contract for “protection of facilities, only guards.” The post said that civilians between the ages of twenty and forty-eight are eligible, that they must have experience in carrying arms, be physically fit, have skills in guarding and protection services, and be able to endure cold temperatures. The post noted that registration opens on March 20, and approvals will be issued on April 1. Interested parties were told to message the poster privately, but several commenters reported not receiving any response. Many users in the groups have expressed skepticism at these alleged contracts.

There is an ongoing discussion in the groups about the validity of “work opportunities” in Russia. Some advised those interested in joining the war to contact the Russian embassy in Damascus to avoid online scammers. Many users posted about their interest in registering but expressed confusion at the enrollment process. “Everyone is talking about the order, but no one knows where to register,” said one user, while another added, “I swear to God, everyone is telling a different story.”

Another user posted details about their own recruitment experience. “My friend, until now, there is no man who has arrived in Ukraine, and no one has left Syria,” he wrote. “Most of these cases are actually scams. I was myself contacted by several recruiters who tried to scam me. I’ve sent a thousand ID document copies by now, and after two days into the process, they ask for money to get the approval. They initially want to fool you, but they’re the ones everyone has been laughing at now.”

One of the groups promoted a Facebook event that was scheduled for March 14 in Damascus. The event description stated it would be “a gathering of young people wishing to volunteer for the Russian army (the task of protecting the inhabitants of the Donbas region).”

The group also promoted a Telegram channel named ISIS Hunters, which advertised a recruitment effort on March 17 and noted that applicants will be tested before being accepted. ISIS Hunters are private mercenaries trained by the Russian private military contractor (PMC) Wagner Group. They operate under another Russian-linked PMC, Al Sayyad for Guarding and Protection Services, which previously recruited Syrians to fight in Libya.

It remains unclear how many Syrians have successfully registered to join the war in Ukraine and whether any deployments will actually occur. The UK-based Syrian Observatory for Human Rights reported that Russia had enlisted 40,000 Syrians. However, the DFRLab spoke to Omar Abu Layla, the executive director of Deir Ezzor 24, an opposition media organization, who said he doesn’t trust the figure. Abu Layla said that “hundreds” had joined the effort in northeast Syria and speculated the number was higher in other cities, but not reaching 40,000 people.

The validity of the enlistment process and whether it is a mere pledge to support Russia or an actual deployment contract is uncertain, however, as the Wall Street Journal reported that Syrian fighters are already in Russia.