A Serb, a Texan, and a Colombian Walk Into a War…

Profiling the foreign fighters who joined

A Serb, a Texan, and a Colombian Walk Into a War… 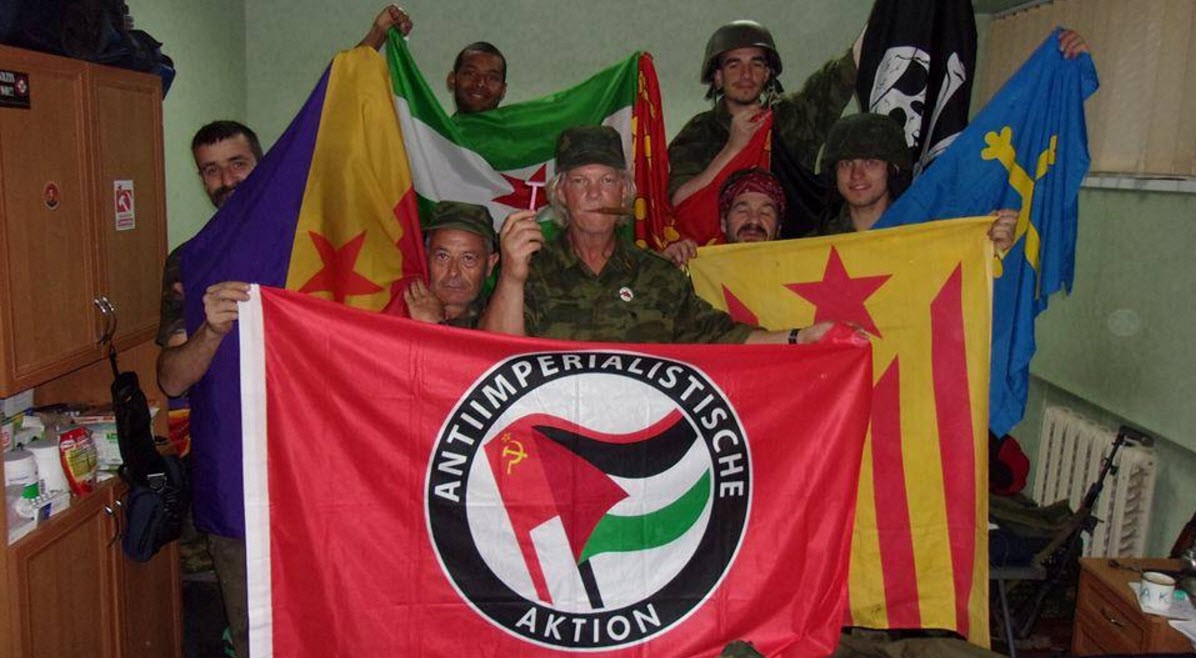 Profiling the foreign fighters who joined the Russia-backed separatists

The tenth measure of the Minsk II agreement calls for the withdrawal of all foreign fighters and mercenaries in eastern Ukraine. While this provision mostly refers to the thousands of Russian volunteers fighting on the side of the separatists in eastern Ukraine, there are also dozens — of perhaps hundreds — of foreign fighters from countries outside of Russia and Ukraine on both sides of the conflict, including Frenchmen, Brits, Spaniards, and other nationalities. Who are these foreign fighters, why have they come to Ukraine, and what do they do after the fighting stops?

Perhaps the most colorful of the Western foreign fighters is the American 56-year-old Russell Bentley, who goes by the name “Texas.” While many foreign fighters are best known for the deeds on the battlefield, “Texas” has started a mini-media empire in Donetsk with a podcast (“Radio Free Donbass with Russell ‘Texas’ Bentley”), YouTube video dispatches (including Episode 22, “Testing a bulletproof vest of the Armed Forces of Ukraine”), and his own website (russelltexasbentley.com).

“Texas” does not fight much anymore, but he was in the thick of the conflict in 2014–5. A photograph uploaded in May 2015 shows him at the Donetsk Airport, with the Novohnativske cemetary to the south of the airport in the background.

He was active alongside other foreign fighters, including a handful of Spaniards and the Colombian fighter “Alfonso” (seen in the back, with his head above the green stripe of a flag):

“Texas” is also quite active with the “Суть времени” (“Essence of Time”) group, stemming from the communist movement and online video series of Russian nationalist Sergei Kurginyan. “Texas” often wears a red shoulder patch that says (in Russian) Essence of Time.

Like many others, Texas came to the Donbass for ideological reasons. When speaking with Vice News’ Simon Ostrovsky, he says that America has a “fascist government,” and has called himself a “communist.” However, as Jim Kovpak at “Russia Without BS” points out, Bentley’s leftist bonafides are weak, and his hodgepodge of expressed ideological views more closely aligned with far-right movements.

“Texas” told The Guardian’s Shaun Walker in a September 2015 interview, that he came to Ukraine in 2014 after following the Maidan protests and seeing a video of a Ukrainian attack on a Luhansk building. As he told Walker, “When I saw that, I cried. I said: ‘I’m going there and I’m going to kill some of the motherfuckers that did that.’ And I have.”

Nowadays, Texas volunteers with humanitarian activities in the Donbass, and is trying to raise money through his website for a litany of projects, including “lectures at Donetsk University about life in the USA and my experiences in the war.” He is not likely returning back to America, as he said in an interview that he will only return to the country if it’s “on a Russian T-72 tank.”

This fighter was identified by Russian newspaper Novaya Gazeta as “Alexis Castillo Idodeai,” and calls himself “Aleksey Castillo” (as seen on his Facebook page) and uses the callsign “Alfonso.” He has given numerous interviews — both to amateur and professional media outlets — and has identified himself as Colombian, but mentioned that he lived in Spain and was a part of anti-fascist group there. He has a profile at Couchsurfing.com that lists his residence as Spain, where his profile picture shows him protesting at an anti-fascist rally (note the red, yellow, and purple flags, indicative of Spanish anti-fascist groups). Alfonso also has his own YouTube channel with videos of him speaking about his time in eastern Ukraine and his activity in the battlefield, though his videos have far less traffic than those of “Texas.”

Before the “Essence of Time” group joined the “Khan” group, it was part of the notorious “Vostok Battalion.” In an October 2014 video, entitled “Alfonso, a communist Colombian volunteer in the Vostok Battalion,” a man speaking Spanish with his mouth covered is seen training with a rifle.

A few weeks later, “Essence of Time” posted a video interviewing the same Colombian Vostok Battalion volunteer — with his face still hidden — who describes why he came to join the fight in eastern Ukraine. There is little doubt that this is the same Alfonso who later revealed himself, as he lists “Sniper” at the Vostok Battalion in his employment history on Facebook.

The Colombian volunteer arrived in the Donbass in October 2014, as he describes in the video below:

As he states in a March 2015 interview with the Russian state-run news program Vesti, Alfonso came to the Donbass while he was a part of a Spanish anti-fascist group. In the interview, Alfonso says that “we could not sit on our hands while Nazis from Right Sector bombed peaceful cities and killed civilians.”

While “Texas” was spurred to come to the Donbass for a similar reason (perceived massacres of civilian populations), Alfonso was clearly more politically active and ideological with his activism with anti-fascist groups in Spain. In February 2015, the Spanish Interior Ministry detained eight Spanish men who fought for separatists in eastern Ukraine, including some who were also involved in the “Essence of Time” group. Though the Spanish Interior Ministry did not give many specifics regarding these individuals, it is highly likely that some of these eight Spaniards were part of the same anti-fascist groups that Alfonso described when he spoke of how “we could not sit on our hands” before leaving for the Donbass.

Alfonso still lives in eastern Ukraine, and will likely be there for the foreseeable future. He married a Ukrainian woman in Donetsk in June 2016, as was widely covered in pro-separatist media outlets.

The “Essence of Time” group publicly announced that he and his wife had a son two weeks ago.

While “Texas” and “Alfonso” have gained notoriety due to their media presence and the unusualness of an American and Colombian being in eastern Ukraine, the Serbian sniper Dejan Berić is better known for his deeds on the battlefield. Berić is now over 40 years old and fought in Ukraine for about two years. He has a fairly active personal page on Vkontakte where he posts updates on his life in Serbian-accented Russian, and a Serbian-language personal Facebook page.

While “Texas” and “Alfonso” mostly stayed around the Donetsk area, “Deki” has been to nearly every location of the Ukrainian conflict: Crimea, Maryinka, Donetsk, Luhansk, and even under Ukrainian captivity.

“Deki” turned up in Sevastopol with the Russian occupation of the Crimean peninsula, and then traveled to eastern Ukraine in April 2014. Early on, he fought with the so-called “Northern Wind” group, referring to the wave of Russian soldiers who came to eastern Ukraine in the summer of 2014. In late July 2014, while traveling between Luhansk and the Russian border, he and other separatist fighters were captured by Ukrainian forces. As “Deki” describes it, he secured his release from Ukrainian captivity by paying thousands of U.S. dollars:

“The final price for my freedom — $19,000. My friends gathered the money in three days and paid in the Kharkiv region.”

He continued fighting across eastern Ukraine as a sniper. Along with the so-called “Northern Wind” group, “Deki” fought with the “1st International Brigade of the Southeast,” where he became a Captain of the “Novorossiyan” army.

In March 2016, “Deki” famously raised a flag for the so-called “Donetsk People’s Republic” (DNR) from a building in the industrial zone (“promzona”) of Avdiivka. The area is now controlled by Ukrainian forces.

While “Texas” and “Alfonso” have more abstract ideological or emotional motivations for coming to fight in the Donbass, “Deki” has a very personal, historical reason dating back to the 1990s. “Deki” (in)famously declared that he came to fight in the Donbass in order to “repay” his debt to the Russian volunteers who fought on the side of Serbia in the Yugoslav Wars of the 1990s. The volunteer says that he believes the he, as a Serbian, has a debt to repay the Rusian nation. “Deki” also stated that he still has a “score” to settle with NATO, due to the bombings of 1999.

In May 2016, “Deki” announced that he was leaving the Donbass to return to his home of Serbia in the town of Putinici. A week ago, “Deki” asked for donations to his Yandex.Money account to write a book.